Somewhat understandably, all that dominates the news and public discourse at the moment is COVID-1, the effect it is having on jobs, the economy, and social norms and practices. This has had the unfortunate effect of diverting our attention away from other long-term problems facing society, most notably the environment.

Recently, however, both Svenja Schulze, Germany’s Environment Minister and Alok Sharma, Britain’s Business Secretary, have called for a global effort for a ‘green recovery’ in the wake of COVID-19. The thought here being that the pandemic might provide us with a sort of ‘clean slate’ with which to build a better, more environmentally conscientious system.

But has the virus had an impact on the environment?

Well, not so much the virus itself, but the effects the virus has had on the way we operate day to day. In China - by far the largest emitter of greenhouse gasses - we saw a 25% drop in emissions at the start of the year, and a subsequent drop of 40% in coal use. Following this, the number of days that recorded ‘good quality’ air was up over 11% across nearly 340 cities in China. Since the situation has worsened in the West, we’ve seen a similar story unfold.

The drop in emissions is primarily due to the fact that we aren’t travelling as much. Transport makes up 23% of all global emissions, and 72% of this figure is made up of driving alone. The virus has forced millions of people from around the world to work from home wherever possible, leading to a huge reduction in traffic on the roads. My hope is that these new practices will become more normal in office environments around the world, reducing the need for unnecessary travel.

But 77% of emissions don’t come from travel, so what about those?

Around 50% of the world’s emissions come from the production of energy and agriculture, with the remainder being made up of industry and other sources. These areas are, for now, relatively untouched by the virus’ effects.

And this is the reason why we have state officials from both the UK and Germany calling for a ‘green recovery’. Although the dip in transportation has seemed to cause a dip in emissions, this is likely only to be temporary; we need to change our habits to change our emissions. We need to rethink mass farming practices, land use, and the production of energy and its sourcing if we want to stand a chance of slowing down the effects of climate change.

The topic is quite a hard one to discuss without coming across as preachy. It is important to remember that, while the majority of scientists agree that humans have played a role in accelerating the onset of climate change; the climate is a dynamic thing. For instance, since early humans entered the scene around 200,000 years ago, we’ve been through two fully fledged ice ages, with a period in-between that was warmer than the climate is today. These facts are important to bear in mind because they demonstrate that while we will see drastic changes around the world as the result of our changing climate, they most likely won’t spell the end of the human race as some might suggest.

This is not to say, however, that the effects won’t be cataclysmic. We don’t know how what the knock-on effects will be yet, but we do know that glaciers will start to melt, sea levels rise, coastal areas disappear, and species will go extinct due to habitat loss.

And, perhaps, an analogue can be drawn between this eventuality and the reality we’re faced with now. Many have criticised the lack of preparation on the part of governments world wide. We knew a novel virus could come some day, potentially with far-reaching consequences like COVID-19, so why was nothing done about it?

Time and money, as always, is the answer. If a government is seen to be plunging millions – even billions – into the research of a virus that may never happen, will the people be happy that these resources are being properly allocated? What about a new minimum wage? What about Brexit? What about free speech laws? The same can be said of environmental conscientiousness – the effort will be long and very expensive.

Human beings naturally tend to prioritise those problems that appear to be the most immediately dangerous to them. This makes sense; if you have to choose between fleeing a sabre-toothed cat or fixing the lining on your hut, chances are that in the moment, you’re going to flee from the cat. Similarly, today we focus on the problems the media presents as the most prescient, and maybe not the ones that ought to be catching our attention.

Maybe the pandemic will give people a new-found perspective on things; perhaps we will develop a longer-look take on the problems of the world. Or maybe we’ll return back to business as usual, or maybe business as normal but with more holidays, more cheap fast food, and more travel to make up for all that we missed out on during quarantine?

We mustn't invest in technologies of the past,” Svenja Schulze told The Associated Press, noting that some countries are holding onto plans to build new coal-fired power plants 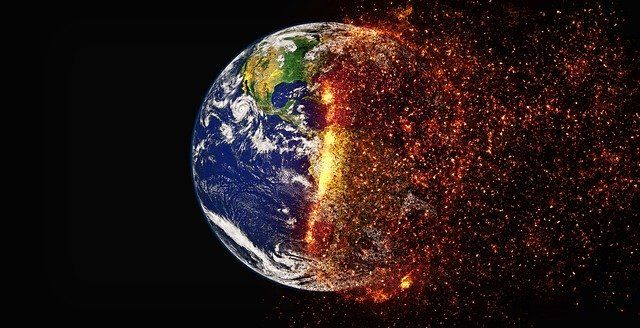