Ursula Von der Leyen, President of the European Commission, indicated in a press conference yesterday that the EU could start limiting vaccine exports in an attempt to ensure the proportional vaccination of Europe.

The EU has said it is prepared to take steps to halt exports to the UK unless it starts shipping back some of its own AstraZeneca vaccines. In exceptional circumstances, article 122 of the EU treaty could be triggered, said Von der Leyen, which would allow the EU to seize the production of vaccines as well as suspending IP rights.

“We are in the crisis of the century”, she said – and not wrongly. The UK is by far the biggest importer of EU vaccines, with over 10m imported to date, but the EU is yet to see the full extent of its AstraZeneca imports materialise.

Von der Leyen points out that while the EU regularly meets its export projections to the UK, the UK’s AstraZeneca programme is on course to deliver just a third of what was promised in Q1 2021, and just 70m doses of a promised 180m in Q2 2021.

Dominic Raab, the UK’s foreign secretary, has been “reliably informed” by the EU’s foreign policy chief that there aren’t any plans to “restrict lawfully contracted supply”.

The question of fairness in this equation is hard to judge. Countries like the UK have soared ahead in their vaccination efforts due to a myriad of reasons, leaving some countries – even those that house the manufacturing of the vaccines themselves – lagging behind and locked down. Is it fair for one country’s economy to rebound before all the others, purely due to its lack of bureaucratic ties?

Tensions over vaccine availability are likely only increase as various nations inevitably jab themselves out of lockdown. This being said, the UK has now vaccinated a majority of its adult population, and an even larger majority of its 70+ population. In theory, this means that most key vulnerable people should now be vaccinated, somewhat nullifying the efforts of a gradual slowdown in the vaccination effort.

“All options are on the table,” she said. “We are in the crisis of the century. We have to make sure Europeans are vaccinated as soon as possible. Human lives, civil liberties and our economy are dependent on the speed of vaccination moving forward.” 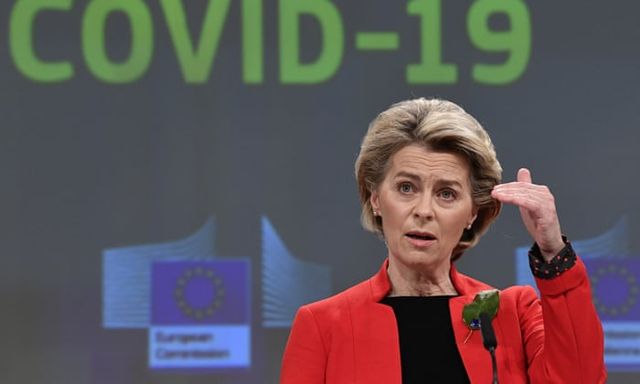